Hallacas, a Venezuelan “everything” dish

My wife and her family introduced me to hallacas, a traditional Venezuelan delicacy. Recipes vary from family to family, and from region to region, but this is the one came verbally from my wife’s grandmother. While hallacas are similar to a tamale, they are wrapped in banana leaves instead of corn husks. They consist of a cornmeal dough, which is patted into a disk on the banana leaf and then topped with a rich stew and several individual ingredients: a shred of chicken, an olive, a slice of boiled egg, a piece of ham, raisins, peppers, and onions. The idea is that you’ll discover these ingredients as you eat.

Everything is then rolled up into a pocket, tied off with string, and boiled in water. As with many holiday foods, hallacas come with a back story intended to remind us to be humble. During colonial times enslaved people would gather what was left from the master’s table and make an “everything” stew for their own families to eat in the form of hallacas. Today, families gather in the kitchen each holiday season to make this food. Since hallacas are conveniently packaged in banana leaves, they can be handed out to friends and relatives during the holiday season.

Note from the blog editor: the recipe below is a family recipe and omits several steps as family recipes are usually passed down to those who have helped make the dish at some point and know without having to be told the order of things and how much of an ingredient to add or what a dough should look like when it’s ready. If you would like to try your hand at making hallacas, I would recommend this recipe  from Bon Appétit. It omits some of the traditional filling additions mentioned in the family recipe (like boiled eggs and onion rings). Like many traditional recipes, every household and every cook has their own version. The Bon Appétit recipe also includes a step-by-step pictorial of how to wrap the hallacas in banana leaves.

Some items you’ll need from the Hispanic aisle and/or shop are: harina pan (Venezuelan corn meal, which is pre-cooked), annatto seeds (cook into the oil for color and flavor), and banana leaves (also available in Asian stores).

Starting with the meat stew:

In about five cups of water, cook large chunks of the beef for about twenty minutes. Remove the beef and, using the same water, cook the pork for about fifteen minutes. Then cook the chicken breasts in the water for about fifteen minutes. Reserve some of the broth to mix into the dough later. Chop the cooked meat into one-centimeter (1/2 inch) cubes. Shred about thirty five strips off the chicken (to include later) and chop up the rest. Add the beef to the broth and, after five minutes, add the chicken and pork. Meanwhile, fry half of the dressing (see next part) with oil and add the other half to the stew.

Chop about 35 strips of the red paprika and the rest chop it for the stew. Take out about sixty onion rings and chop the rest for the stew. The tomatoes, garlic, sweet peppers, parsley, and cilantro, all get chopped up and put in the stew. Assemble a plate with the toppings: the chicken shreds, the strips of red paprika, the onion rings, eight quartered eggs, one jar of drained green olives, raisins soaked in water.

Mix some harina pan with water and oil to make a soft dough that you will then drop into the stew to thicken it.

That completes the stew. Next you’ll make the dough for the inside of the banana leaves. Mix the harina pan with the retained broth and the oil colored by the annatto seeds. Knead it until you get a smooth consistency and a soft texture. You can use some yellow corn meal to help with the color, as well. Then divide it up and roll it into individual balls. Cover them and let rest.

Now that you have the stew, the toppings, and the dough ready, you can cut and wash the banana leaves. You need square sheets and then rectangular wrappers to go around the assembled hallaca. The package should be water-tight, as it’ll go in a boiling pot. Once you have cut and washed the leaves, bring the pot of water to a boil and begin assembling. You put each ball of dough on the square banana leaf, pat it out into a disc, ladle some of the stew on it and then add the individual toppings.

Once it’s all together on the leaf, you have to fold/roll it into a pocket. This takes some practice and the first few are likely to go wrong. But once you get the hang of it then you can wrap it all up and tie it off with string. There may be videos on YouTube. Once the hallacas are all packaged and tied off, they get boiled for one hour. Then they’ll be ready to enjoy as a festive meal. 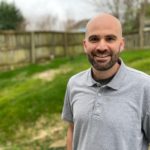 Gerhard Schneibel writes short stories and novels and lives in Knoxville with his family. He started writing fiction in the writing program at Goucher College (Maryland) and continues to practice his craft through the Knoxville Writers’ Guild workshops. In addition to fiction, he studied journalism and business and currently works in communications for higher education.