Caribbean fruitcake, called “black cake” is incredible, nothing like the fruitcakes everybody tries to get rid of. But like all good things, they take time. In fact, you need to start in September to have these delicacies for Christmas. Here’s my black cake back story and recipe.

Christmas has always been an interesting holiday for me. Growing up, my family unit consisted of my mother and myself. Every year until I turned 16, the Sunday after school closed for the holidays we would get on a plane and go to Jamaica where my maternal grandparents still lived. My mother would stay up late packing and early on Sunday morning a family friend would swing by and manhandle the two giant suitcase in the back of his car and take us to the airport.

Getting from our house in Trinidad to my grandparents’ house in Jamaica took a day. We would leave our house around 5:30am and drive eastward into the sun towards the airport. The flight was always full and check-in, then boarding felt indeterminable. There were no direct flights from Trinidad to Jamaica and our flight usually had three or four stops which turned a four hour trip into six or seven.

The length of the trip did nothing to temper the excitement of seeing my grandparents and participating in one of the best Christmas traditions – making fruit cake or as it’s known in the Caribbean, black cake. Most people hear fruit cake and think of a dry, tasteless log that gets passed from family member to family member like a doorstop, Caribbean fruit cake is completely different animal. The day after we arrived my mother and I would head to the supermarket and purchase the approximately 12-16 combined pounds of fruit, flour, sugar, eggs and butter as well as a large quantity of alcohol. We would then head back to the house where my job was the grind all the fruit – prunes, raisins, currants and into a huge metal bowl that existed only for this purpose.

Once the fruit was ground, my grandmother would pull out another metal bowl and jars of fruit that had been soaking in alcohol from the previous year and we would take turns mixing in the other ingredients until we had cake batter. The current year’s fruit I had ground went into the jars, got liberally covered with white rum and put into the pantry to soak for the next year. Once the batter was made it, the next step was greasing and lining the pans. My grandmother’s cake was the stuff of legend, my mother would take five or six cakes home with us and dole slices out to her close friends and confidantes. My grandfather’s clients and business partners would swing by during the holidays to get a slice. This was our tradition, this is how the holidays truly began for me.

The year I turned 16, my grandfather died and my mother strong-armed her mother into moving to Trinidad with us. That Christmas we tried making black cake but somehow my mother managed to fall asleep and let the cakes burn. This became the excuse for a massive fight every year between my mother and grandmother which pretty much turned me off the whole holiday. The Christmas after I emigrated to the US, my wife, Victoria who loves the holidays, thought it would be a good idea for use to attempt to restart this tradition.

It took us three years of fits and starts to finally perfect my grandmother’s black cake recipe and now we have a new tradition. We make a quarter batch in cupcake molds and share them with friends.

Method
Grind fruit together in meat grinder or food processor and put to soak for 2-3 months in rum and wine in glass jars or bottles. Make cakes about a month before they will be served – say Thanksgiving weekend for Christmas.

Blend (or mix) butter and sugar in 1/2 lb batches, adding 1 egg yolk at a time until all sugar grains disappear, add browning and mix through. This is really best done in a standing mixer but can be done with a wooden spoon if you need a workout.)

Blend (or whisk) egg whites with lime zest until peaks appear and set aside. Depending on how green your limes are, your egg whites might turn green. This is fine.

Divide cake mixture among pans and place in moderate (250 F degree) oven, lower the temperature to 175 degrees after an hour. Insert knife or wooden skewer into cakes. Cakes are done when knife or skewers come out clean and dry.

Remove from oven and let cool.

When cakes have cooled, turn out onto boards and add rum or wine as desired. Lightly wrap cakes in waxed or parchment paper and store in cake tins or storage containers. Add rum or wine – a couple table spoons per cake  once a week until ready to serve. If kept closed up in a cool, dry place and regularly topped up with rum, cakes can keep until Easter.

Recipe can easily be halved or quartered. This makes four good-sized cakes. Black cake is served in very thin slices. 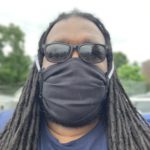 keifel a. agostini, who prefers his name is lowercase for aesthetic reasons, is a designer, technology wizard, and writer. He is also the founder of 1000volt Press and a writer of essays. Most of his writing contains run-on sentences and strong language, and can be found at his blog.