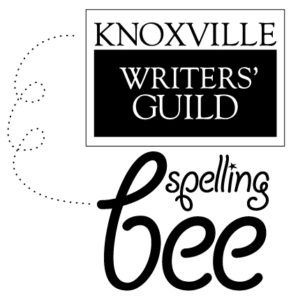 I’m Mike Smith, the Director of this year’s Knoxville Writers’ Guild Spelling Bee. I’ve become interested in researching the history of Spelling Bees and in particular the role of Spelling Bees in contemporary American culture. I’m sure we’re all familiar with the Scripps National Spelling Bee, open to students through 8th grade and televised on ESPN. However, I’ve posed a larger question: Has the idea of the Spelling Bee found its way into other aspects of our culture such as books, movies, and theater?

Let me report briefly on my results. I’ve focused first on the use of the Spelling Bee motif in literature. I’ve been amazed at what I’ve found. The theme of the Spelling Bee is intertwined with issues such as embarrassment, cheating, jealousy, parental pressures, gambling in school, mean witches and magic spells, and wetting your pants in front of the class. So far I’ve only read books appropriate for pre-schoolers and 2nd graders! Here are three examples.

In A Very Witchy Spelling Bee, the young witch Cordelia wants to enter “The Witches Double Spelling Bee Held Every Ten Years to Celebrate Good Spelling and Spells.” However, she has to compete against Beulah Divine, age two hundred and three, who has won thirteen times. The rules are as follows: Contestants draw a letter from a bowl, spell something on stage, use the letter to change the chosen object into something new, and spell the new word. Beulah draws the letter C from a basket then looks at Cornelia and spells H-A-I-R. She then uses the C to spell C-H-A-I-R and Cornelia’s hair turns into a chair! The assembled witches call Beulah a “fiend”. Cornelia triumphs, however, by drawing an R, and uses it to change F-I-E-N-D into F-R-I-E-N-D which transforms Beulah’s personality.

In The Berenstain Bears and the Big Spelling Bee, Sister Bear is a good speller but she’s bad at math and science. To compete in the school spelling bee, however, she will have to miss soccer practice, her favorite activity. Papa Bear, however, pushes her relentlessly to study. Sister Bear wins the school bee by correctly spelling V-I-C-A-R-I-O-U-S which means “taking undue pleasure from the achievement of others”. Papa Bear realizes that this is what he’s doing and tells Sister Bear that she doesn’t have to compete in the county bee. Sister Bear goes to soccer practice instead.

Finally, in Pinky and Rex and the Spelling Bee, Pinky is excited about the second-grade spelling bee. His friend, Rex, however, is afraid that everyone in class will laugh at her when she misses a word. Pinky is also worried about the new African-American student, Anthony, who looks really smart. Pinky does win the spell; however, he had too much to drink at lunch and, in his excitement at winning, he wets himself in front of the class. His teacher quiets the class and lets Pinky go change clothes. On the way home, Pinky and Rex swear undying friendship.