We’re pleased to spotlight Michael Jordan and his writing life. Thank you for helping us spread the word on how the KWG supports our writing community for writers at all stages of their writing journey. 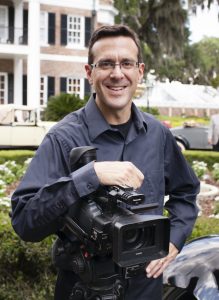 I grew up in western North Carolina in towns between Asheville and Charlotte, majored in history at Carson-Newman College in 1994, and wound up working as a local television news anchor in Savannah, Georgia, where I fell in love with maritime and architectural history and got hooked on telling stories. After leaving the anchor desk, I worked for several years as the public relations director for a group of local history museums, earned a masters degree in history, started my own video production company, and worked as a freelance military correspondent covering local troops in Afghanistan, Iraq, and at sea. Eventually I produced more than thirty original films on Savannah history, including orientation films for local museums and videos of archaeological projects on land and at sea. I moved to Knoxville in mid-2014 when my wife accepted a position at the Howard Baker Center at UT. You can check out my films, books, and magazine articles at www.michaelljordan.com. I finally put down professional roots in Knoxville when I started working at Blount Mansion National Historic Landmark in August 2018. www.blountmansion.org