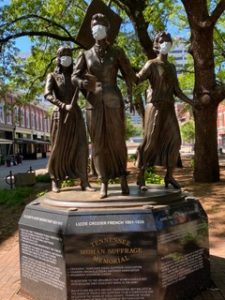 If you’ve noticed all the media attention about the suffrage movement lately, you know that women across the U.S. today have the right to vote because Febb Burn told her son to “be a good boy.” He was and he proved it when he cast the deciding vote in the Tennessee House of Representatives, allowing our state to be the 36th and final state to ratify the 19thAmendment to the Constitution.

What you might not know are the details of the two weeks preceding that vote when Nashville’s  Hermitage Hotel was a hotbed of political shenanigans. The three titans of Tennessee’s economy—railroads, whiskey, and manufacturers—had lobbyists stationed at the hotel to influence legislators to vote against ratification, fearing that if women got the vote, that would be the end to child labor, 15-hour workdays, etc. But the suffragists were also in the hotel (directed toward the side entrance if unaccompanied by a man) to counter their presence. Of course, the women weren’t allowed on the 8thfloor, the location of the Jack Daniel Suite where lobbyists plied the legislators with whiskey, promises, and cash. Legislators, being politicians, agreed wholeheartedly and stuck a red rose in their lapels until they were approached by suffragists. At that point, they would agree with the women and exchange their red rose for a yellow one, symbol of the suffrage movement.

The reason I can tell you all this is because I researched how the ratification came about when Jayne Morgan, Artistic Director for Flying Anvil Theatre, commissioned Linda Parsons and me to write a play for production in August, the 100-year anniversary of the passage of the 19th Amendment.

Linda had experience with co-writing plays, but I had none. It didn’t seem like too much of a stretch to agree with someone about words and where they go on a page. As we began, the challenges became apparent. Our approach was the same—research and begin finding a structure for the play—and we were in total agreement. Then came the words and the order of the words. I came to see us in terms of music: Linda is a waltz, I am jazz. Can you hear the atonality of this composition?

Luckily, Linda and I trust each other as writers. We each find the patience to hear the other and consider whether a suggestion adds to or subtracts from the focus of the play, whether we are giving the suffragists their due. After all, the play is about these vigilant women who were harassed and maligned and worse trying to convince recalcitrant politicians to give women what we enjoy today: the right and responsibility to influence our future. And that’s how we came to write SuffRAGE: To Give Voice.